Welcome to the Jungle!

After our time in the Pampas, we spent a few days in Rurre before heading out in to the “real” jungle.

Rurre is just about as touristy as a town can get, but unlike in other countries (ahem, Peru), the people here don’t constantly pester you to buy this or that, or go on their tour. Even when you ask for information about a tour, there is zero pressure to book. Refreshing. It is one of the many things that makes Bolivia a great place to travel.

During our time in Rurre, we didn’t do anything too exciting. The hammocks at our hotel were way too relaxing to leave for very long, and it was so hot we didn’t want to leave the shade.

We did celebrate the New Year by buying some cheap fireworks and letting our inner pyromaniacs have some fun.

Finally got to use the "Fireworks" setting on the camera!

One evening, we went up to the mirador above the town to check out the sunset. We enjoyed a few cold beers and some snacks while taking in the expansive view over the Amazon jungle.

Put the beer down before hang gliding! 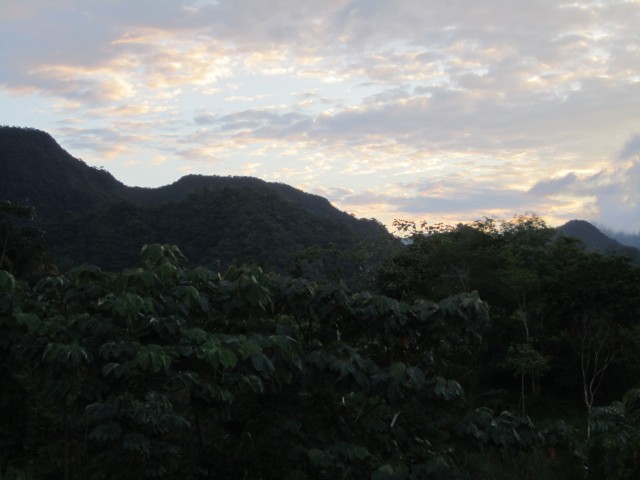 Following our insane Pampas experience, we decided to check out other companies to explore the jungle with. After receiving many recommendations, we decided to go with San Miguel del Bala, a jungle experience that is run by a small community that lives in the area. We opted for the 3 day/2 night experience: one night at each of their camps (one right outside their village and the other deeper in Madidi Park).

Our trip started from Rurre, heading out in their canoe, and up the river to the first camp.  The ride was amazing; the river seemed to have sliced its way through the jungle and mountains.

Boat ride into the jungle

When we arrived we met two friendly students from The States, were treated to an amazing lunch, and then shown our private getaway.  It was about a five minute walk from the main part of the camp and it truly felt out on its own.  It also turned out to be one of our nicest accommodations, with its own porch, sitting room, and bathroom.

Our home away from home

The first excursion of the day consisted of a tour of San Miguel de Bala.  The tour company is completely supported by this town, and the people were proud to show off how they lived.  At one point we enjoyed fresh cane juice after Joe and the guide ran it through the manual press. 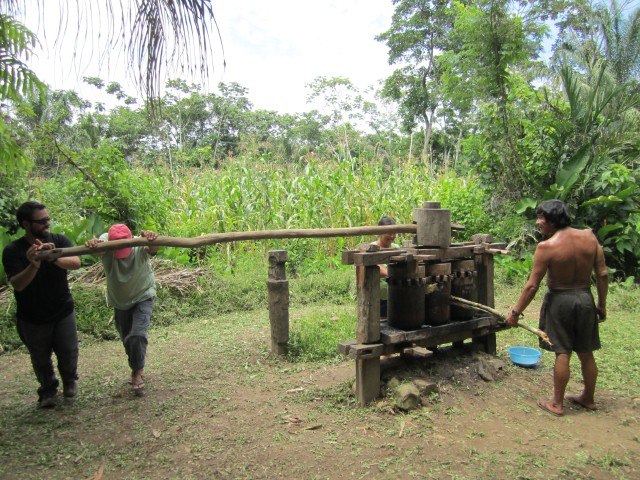 Fresh sugar cane juice = Hard work (Joe and the guide working hard. Where is Kristen you ask? She is in the shade taking pictures.)

This juice (guarapo) was very refreshing in the hot heat of the jungle.  The key to making it extra special is a smidge of lime (just in case you are making some at home now).

Next, we watched a local woman make a basket-like container and fan out of palm fronds faster than it took to type this sentence.  It was amazing to watch her hands move so quickly while making such an intricate weave.  The fan turned out to be worth its weight in gold because it helped keep us cool during our time in the sweltering jungle.

Inside of the basket. This seriously took her about 5 minutes to complete.

During the second part of the day, we hiked through the jungle for about two hours towards an amazing canyon.  Our guide had us walk about 50 feet apart so we could “try” to find some wildlife.  I think if anything was within 100 miles, it could hear us crunching through the foliage and ran for cover.  The jungle is a much harder place to spot animals because of its dense foliage, and I’m sure the sound of us walking was not helping anything.

On this hike we only discovered a few insects and butterflies.

We reached the canyon without being mauled by a puma and started exploring.  Our guide informed us we might see bats, spiders, and snakes. Why did we want to come here again?

Entrance to the canyon.

At first the entry was pretty mild, but soon we were wading through waist-deep water and scaling boulders.

Joe holding the walls up

It was amazing how dark it was down there; what light the jungle didn’t swallow up, the canyon did.  We also suffered a loss during this trip. While passing Kristen’s camera between each other, it fell through our hands and decided to take a swim (and no, it wasn’t in the handy waterproof case we have been carrying with us for five months).  We did find it in the water, but needless to say it just didn’t want to work for us anymore (luckily the memory card still worked after drying off). 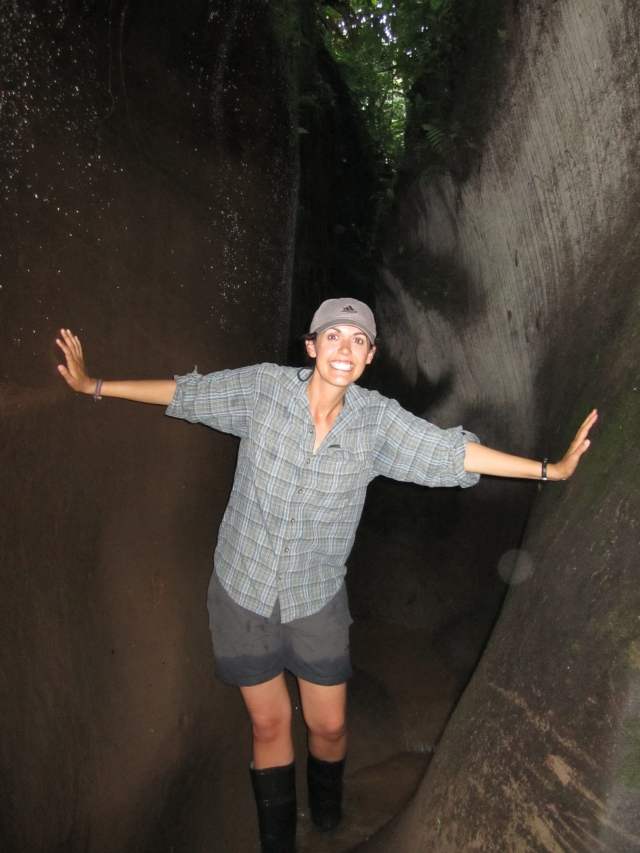 Last known picture from the Canon... Rest in peace little buddy. (Side note: got to love the look of shorts and rain boots!)

In the canyon, we were “lucky” enough to see huge spiders, many bats, a dead snake, and even a rat, which Kristen was convinced was going to hop on her for a ride through the water. 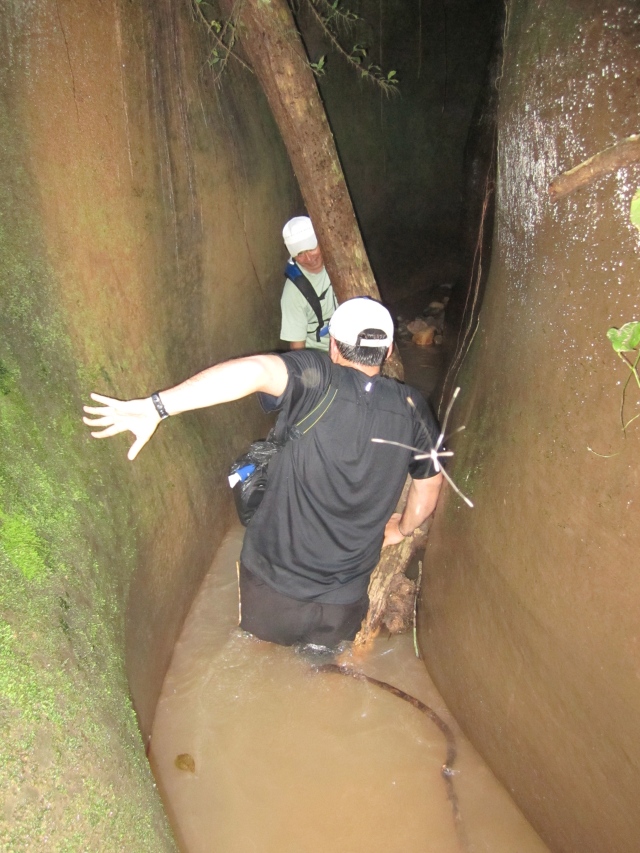 A few things to notice here: 1. Joe's camera is dangerously close to the water, 2. A big spider behind Joe magically floating, and 3. That is not a snake in the water, at least we hope so.

While leaving the canyon, we had our first run in with “El Fango” or a type of quicksand-like mud. Joe found it first and quickly sank down to his knees. Once he wiggled his way out we boarded the canoe and headed back to camp.

The next day we again boarded our canoe and headed up the river for three hours and into the Madidi Jungle National Park.  We spotted many beautiful macaws, parrots, and even a Capy lurking by the river. 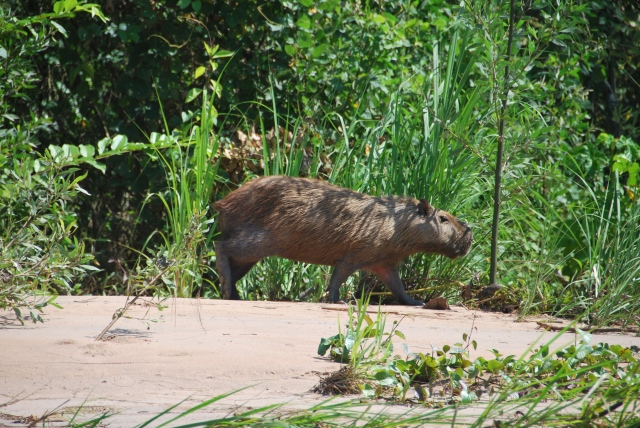 After arriving, we took off into the jungle to see what we could see.  It was rainy season so the need for the trendy black boots was a necessity. Unfortunately, the animals don’t have these boots and they tend to hide out during this time of year.  We were lucky to not actually get rained on during any of our hikes, but the mud proved that this place gets its fair share of rain.

Now we might not have seen many animals, but we found many signs of them. This might not look like much, but it is the footprint of a jaguar.

If we had been here two days earlier we would have scored (or perished).

The lush jungle was amazing and it seemed like it could swallow up anything.

Kristen being eaten by a tree 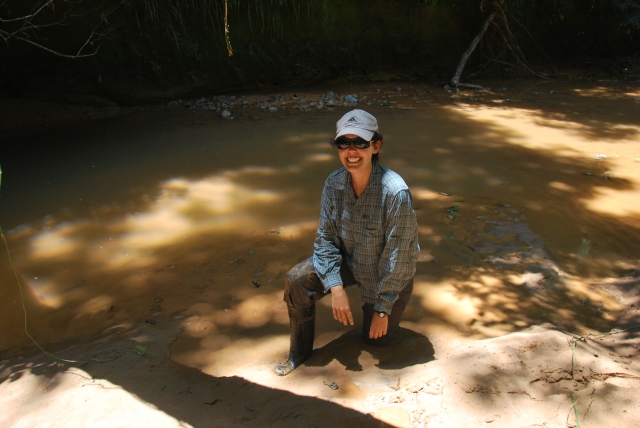 The landscape was so lush and full that it was really breathtaking.  We were lucky enough to spot some Leoncito monkeys from a distance.  Good thing for the guide, or we would have walked right past them. 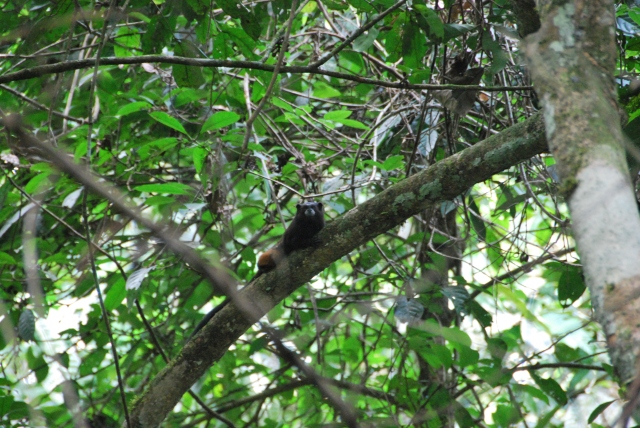 Our hike ended at the river on a mud/sand bar, where we tried our hand at some Amazon fishing.  No luck in catching any fish, but we had a good time trying to not get eaten by the mud.

Trying to get dinner (I think we need to purchase some of these boots for home).

That night we headed out for a night jungle hike, and our guide again did a great job in finding caiman, frogs, and bats.  At some points he would have us just sit and listen to the sounds of the jungle.  It was a little eerie to hear all that was going on without being able to see any of it.

When we returned to the cabin we realized the wildlife tour was not over as Kristen found this friendly guy trying to get into her bag. 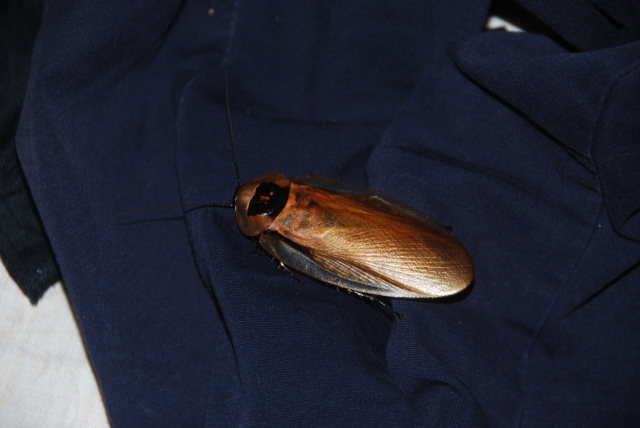 He seriously could fly away with a small child.

During the night, Kristen awoke to some fluttering and realized that a bat was trying to get into her mosquito net. She tried to alert Joe, and he responded by continuing to snore  (he claimed the next morning that this was the best way to scare the bat away).

During our last day in the jungle, we explored an amazing place where Macaws and other parrots nest in a clay cliff face.  When we showed up, we were amazed at the sheer number or birds flying and roosting in the wall. 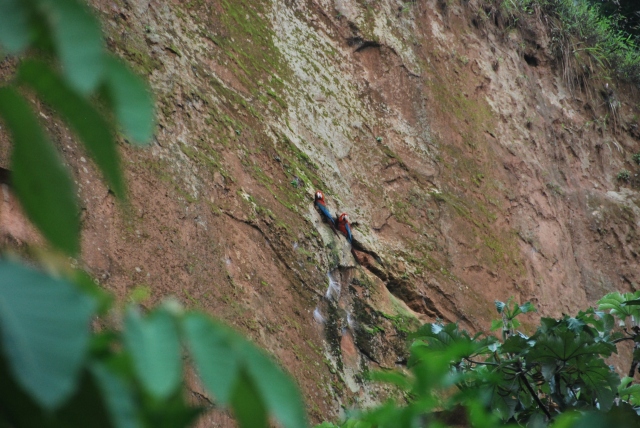 Macaws nesting in the cliff face

Joe wished he had a bigger lens to capture the birds closer.  They made such an amazing sound, which our guide would reproduce, and it would cause all the macaws in the area to clammer at him.

Pictures do not do this place justice as it was one of the most amazing places we have ever seen.  The incredible number of these beautiful birds was mind-blowing.

We ended our trip in the jungle with a boat ride down the river back to Rurre.  The ride again was enchanting and it gave us time to reflect on our jungle experiences. 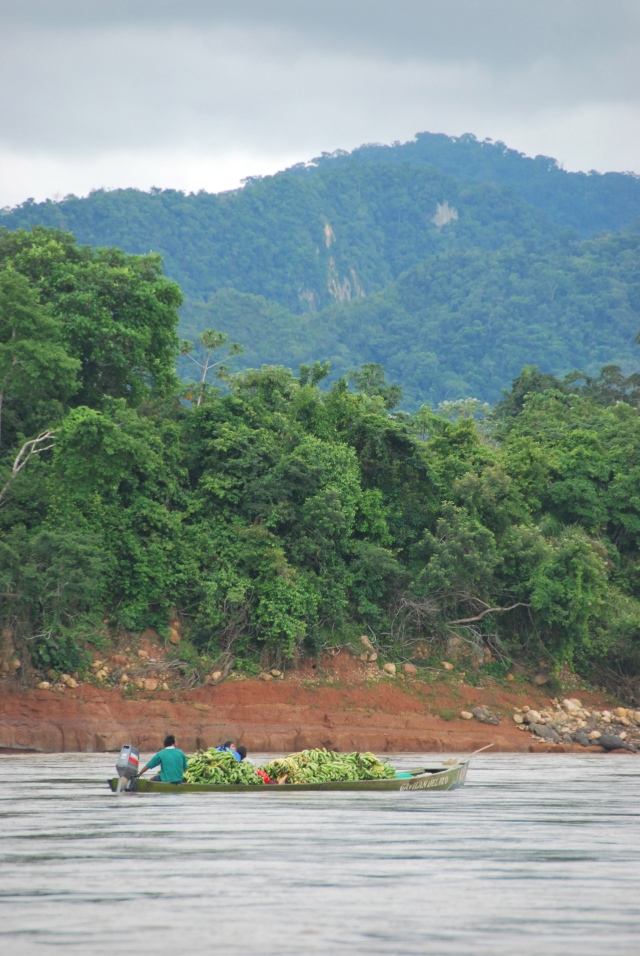 If you are ever in Bolivia, the Jungle and Pampas cannot be missed.  They are truly something special.  Just make sure you bring plenty of bug spray.

Off to find dinosaurs in Torotoro.

On a side note, I would like you to meet our almost dog, Lover Boy.  We met our new friend on New Year’s Eve in a bar when Lover Boy (LB) came and put his head in Joe’s lap (that’s how Joe gave him his name).  He then hung out with us for the remainder of the night and met us at the hostel to walk us to our Pampas trip.

After that, we didn’t see him and assumed that LB found some new gringos to hang out with. However, on our last day, while waiting for the bus to the airport at 5:30am, LB again showed up and ran over to Joe (the song “Reunited and it Feels so Good” was playing in Joe’s head).

Joe thought this was the end until LB snuck onto the bus to spend just a little more time together.  If only we could have figured out a way to sneak a dog on the plane, travel with him for 5 months and 4 more countries, and then sneak him back home, Rurre would be missing a dog. 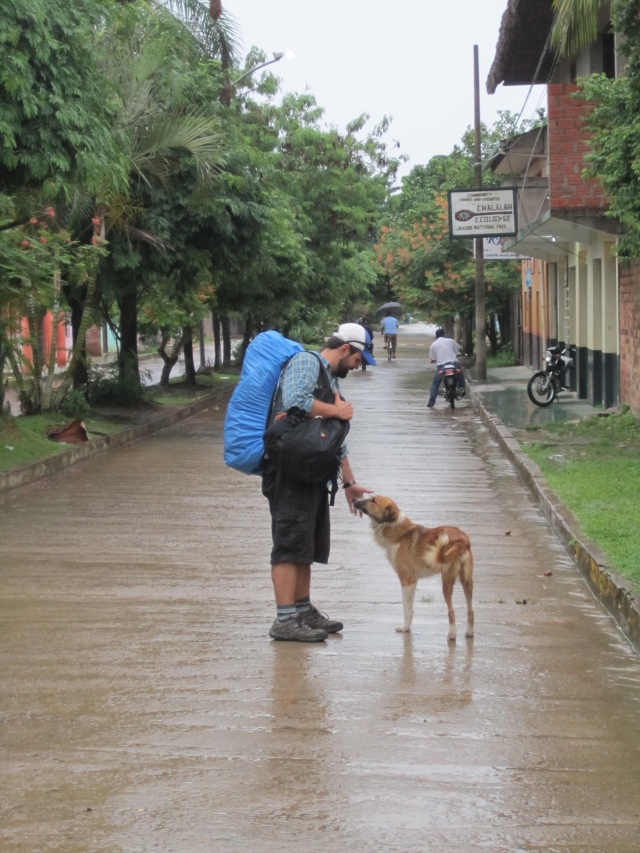 Joe and Lover Boy saying goodbye before the Pamaps trip. (And yes Marlene, he does kind of look like Golden Baby).

Taking off for a year to see what the world has to offer.
View all posts by shoefry →
This entry was posted in Bolivia and tagged canyon, jungle, lover boy, macaws, madidi, rurrenabaque, san miguel del bala. Bookmark the permalink.

8 Responses to Welcome to the Jungle!