The Pampas- We couldn’t leave South America without at least one Drunken Guide Experience.

**We would like to apologize for the delay in Blogs, E-mails, Tweets and whatever else requires the internet.  The internet has been slow (at best) in Bolivia and finding a reliable signal outside of a major city is a chore.**

We traded the cold, mountain climate of La Paz, for the sweltering heat and high humidity of Rurrenabaque. Rurre, (as the locals call it) is located in the Amazon and was the home base for our adventures here.

As usual in Bolivia, getting to our destination was part of the adventure. We decided to spend a little more money in order to avoid a 24 hour bus ride, so we instead took a 35 minute flight. Once we arrived at the airport and saw our plane, we knew this was going to be a little different from your ordinary flight in The States.

The plane was in need of a fresh paint job, and the pilot and co-pilot looked old enough to only have driver’s permits, but we threw caution to the wind and boarded. This plane held only 18 people, and the co-pilot doubled as the flight attendant by making the announcements (luckily, there was no snack and drink service). We were fortunate enough to be in the front two seats, where we had great view of everything that was going on in the cockpit. We could literally see through the front windshield! 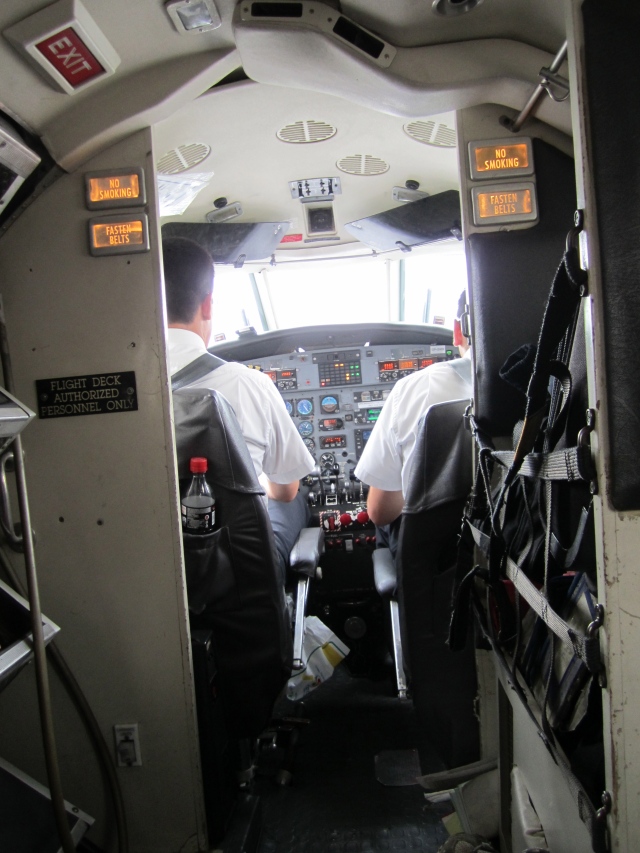 Inside the flight to the Amazon - Joe was ready to jump in and help if needed. After all, he does fly remote controlled helicopters.

The flight was somewhat rough and mostly a decent, as we left from 13,000 feet and would arrive at 500 feet in 35 minutes. Soon the peaks of La Paz disappeared and were replaced by a carpet of lush jungle. On approach, we could see a little runway cut into the trees and we nervously watched the pilots concentrate as they landed. I’m sure it was everyday stuff to them, but it was slightly nerve-racking for us.

The Rurrenabaque airport could only handle one plane at a time on their dirt taxi way, and a screen door was all that stood between you and the plane. (Got to love the security.)

Once in the town, we easily booked a hotel for the night of the 31st, but we soon found out that most places had no vacancy for the following evening. Instead of sleeping in the plaza, we decided to just leave for a Pampas (the grasslands) tour on the 1st of January. The early morning start following a late night of New Year celebrations, made Kristen a little hesitant, but we seemed to have no other options. Joe assured Kristen that nothing would go wrong, and in time, he would regret saying that.

We met our driver and guide from Bala Tours early the next morning, and it quickly became evident that our guide had a really good time partying on New Year’s. When we first met him, he seemed to be very hungover, but after a few slurred sentences in Spanish, we realized that he probably walked here from the nearest bar. Our driver was totally with it though, so we felt confident in departing as planned. We figured we had a three-hour drive ahead of us prior to arriving at the Pampas, and that should be plenty of time for our guide to brush it off and catch up on some sleep.

Wrong again. Our guide did sleep on the ride (more like passed out), but it seemed to only give him fuel to continue the party. Once we arrived at the river, we boarded a canoe to ride the rest of the way to the camp. While watching some of the pink dolphins play, we turned around to see him drinking from a bottle while driving the boat. He “cheersed” us, “Feliz Ano Nuevo,” took a shot of who-knows-what, and Kristen shot Joe “the look.”

We arrived at the lodge unscathed, had a delicious lunch, and enjoyed a few hours of down time. The rest of the staff did everything they could to make us comfortable. We again assumed our guide would take advantage of the free time and getting some much-needed rest.

Wrong AGAIN. When we reconvened in two hours to do an exploration with the boat, it seemed that the only thing he had accomplished was finishing that bottle.

Not to fear, the camp owner elected his son to drive the boat, and our guide slurred incoherent sentences at us on the boat ride. It seems all of his English knowledge flew out the window and his drunken Spanish was pretty difficult to decipher. He tried his best to point out animals and tell us about them, but his finger had trouble pointing them out. 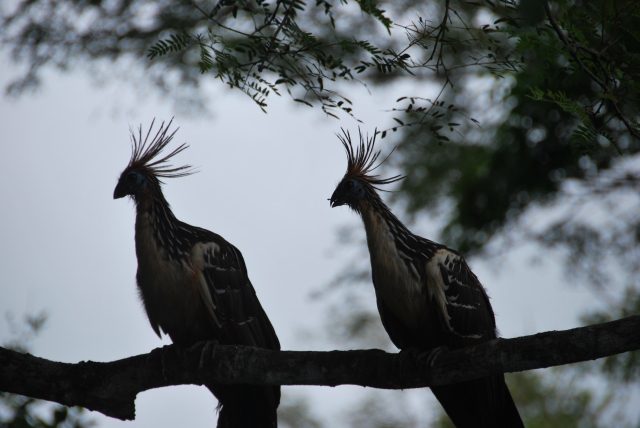 Our young driver looked horrified and tried to fill in the gaps where he could . At one point, our guide insisted that the driver turn off the motor. Our driver ignored his multiple requests, so our guide got up and turned it off himself. He then began paddling with an oar, but that quickly went awry, and our driver had to restart the engine.

He insisted on taking our picture. Despite telling us not to worry, "please don't drop the camera!" was all that we were thinking.

At some point in our journey, he must have realized that he was in big trouble. He then told Joe sorry at least a thousand times, and that he would make it up to us. He kept saying this was a practice, and he would give us a “full day” tomorrow. “Full day tomorrow,” became his new chant as we started to return to camp.

Enjoying our boat ride in the Pampas.... wasted guide (behind Kristen's head) and all.

Kristen mentioned that capybaras are one of her favorite animals, and our guide instantly perked up and he claimed to know a spot where they were always found. We instantly sped off and then docked at a little piece of land not far from our camp. The driver walked with us and we scored right away in finding two capys.

Our guide was distracted and didn’t even notice the capys. He headed off a little ways and decided that he needed to answer nature’s call. While he was mid-stream about 100 feet away, one of the capybaras that we were looking at loudly grunted, causing our guide to turn, throw his fist in the air, and cheer himself for finding them. Kristen shot Joe another look, but this time while suppressing her giggles at the absolute ridiculousness of the scene.

To say we were a little discouraged was a bit of an understatement, especially after booking with the nicer and more expensive tour company. Even after the day’s events, we held out the hope that he would deliver the goods the next day.

It seems like every tourist that we have talked to has had their own drunken tour guide story, so I guess this will be ours (and hopefully our only one).

Here’s the good news: he totally delivered the next day. We spent 11 hours in our motorized canoe with a sober guide who actually found an amazing amount of animals. He was bound and determined to find every type of animal for us to make up for the day before.

It turned out that he was great at spotting and describing the different wildlife, and he actually made a decent guide. We don’t think he is going to win the guide of the year award, but he more than made up for his previous blunder by taking us to places that people don’t normally get a chance to explore.

We again took far too many pictures, but here is a little photo safari showcasing our day on the river and some of the amazing animals we spotted.

Kristen amazed at the wildlife and beauty

Our guide encouraged us to dangle our feet in the water and splash around when the dolphins were present. When a dolphin came up and touched Kristen’s foot, she shrieked and the dolphin then blew a bunch of bubbles.

We also saw many different types of monkeys on our trip. 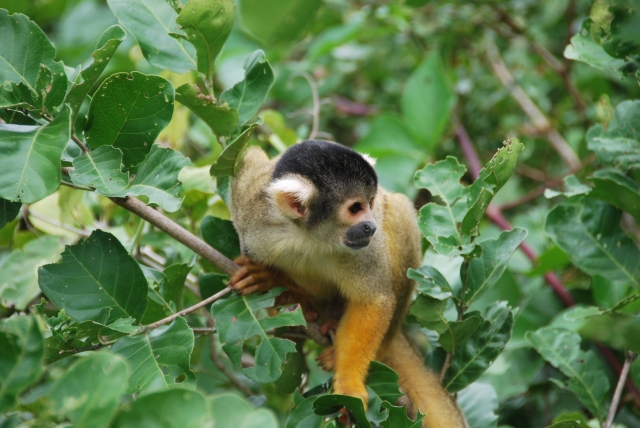 We never thought we would be bird watchers, but on this trip we have encountered so many different birds that it hard not to become one.

Blue and yellow Macaw - from far away

Macaws in flight - No, not a Barn Swallow.

We also saw a few Caiman and other swimming creatures. 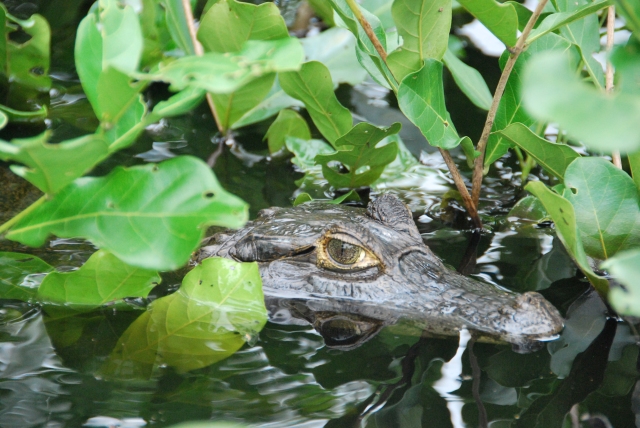 Always room for another of Kristen’s favorites. 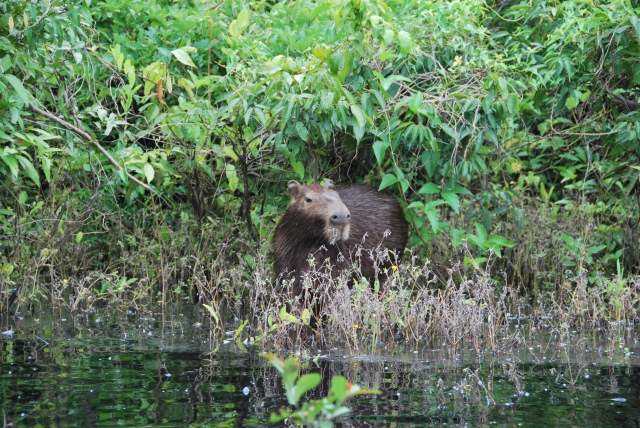 Beautiful view on the river. The water during this time of the year creates a perfect black mirror. (And yes, just thinking that got the Arcade Fire song stuck in my head.)

Our greatest find was made by Kristen on our way back from our long day. This three-toed sloth was only a few months old, and he was making his way up a vine for a snack (or more sleep).

Once the sloth was spotted, our guide was satisfied that we had seen everything there is to see (minus a jaguar), and we headed back.

Later that night we took the boat out to look for caiman.  When you shine a light at the caiman, their eyes have an amazing glow, and it was a bit eerie to see the reflection in absolute darkness.

Caiman eyes glowing in the distance

One of the biggest adventures in the Pampas was just heading to the bathroom in our camp.  You were guaranteed to find at least three frogs per stall, and sometimes more.  Using the restroom while trying not to get eaten by mosquitos or have a frog land on you was a new and “interesting” experience. 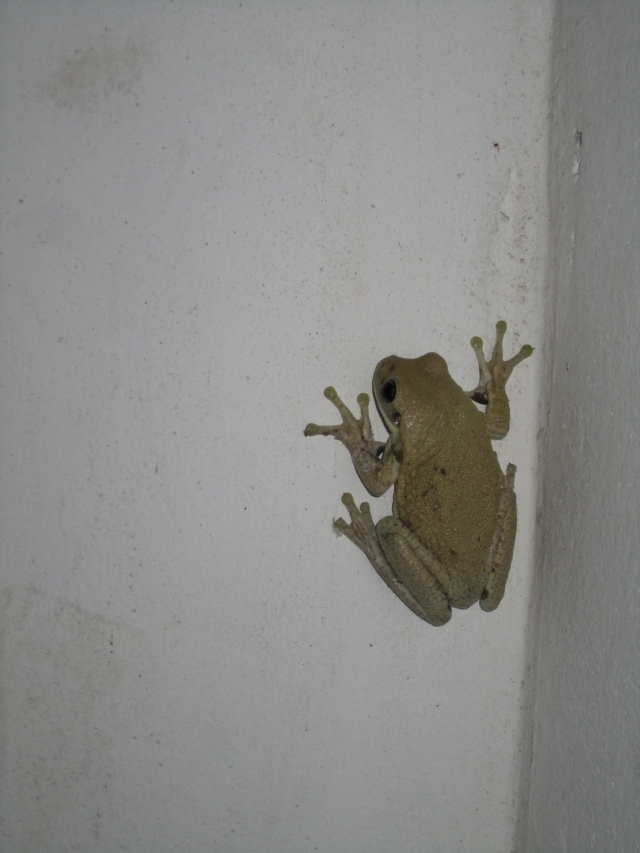 Tree frogs were found in the bathroom too!

One night Kristen happened upon a tarantula which was as big as her hand.

A bit blurry, but I was shaking taking the picture.

This is not the actual tarantula Kristen found, but after some teasing from Joe about the “actual” size, she was determined to locate another one.  This one was found under some stones and was truly as big as your hand, if not bigger.

The Pampas turned out to be an incredible place, even after our rocky start.  Although starting on New Year’s Day was risky, we didn’t see many other people and we seemed to have the whole area to ourselves (which is quite different from most other travelers’ experiences in the Pampas).  The wildlife was great and the Amazon lived up to all our expectations.

For more pictures of animals spotted in the jungle, feel free to check out www.joeandkristenfry.shutterfly.com. (More pictures from the Pampas are in the Bolivia folder.)

Now, off to the jungle.

Taking off for a year to see what the world has to offer.
View all posts by shoefry →
This entry was posted in Bolivia and tagged bala tours, capybara, drunk guide, monkeys, pampas, pink dolphins, rurrenabaque, sloth. Bookmark the permalink.

17 Responses to The Pampas- We couldn’t leave South America without at least one Drunken Guide Experience.