Chile is the first country that we have visited where the locals have more money to spend, and it shows in their beverage selection.  In Chile, there is always large selection of beers and wines to choose from, and we no longer have to suffer down a bad beer or cheap wine.  We did sample our fair share of beers, but we will only highlight a select few in this post.

Kunstmann is a good choice if you are looking for something similar to a Heineken.  It had a nice hoppy taste, and it went down smoothly.  It didn’t really knock your socks off, but it is better than most brands available in the fridge. 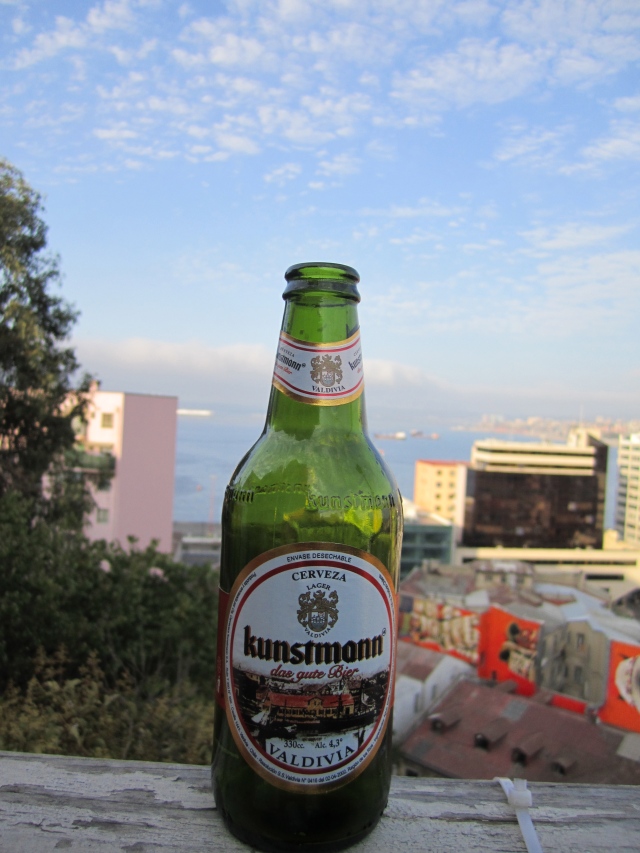 If you know anything about Joe, you know he loves his dark beers, and the darker the better.  This has been hard to find in South America, but one stood out in Valparaiso.

Trolley had a great malt and coffee flavor, and it was almost a meal on its own.  So far, this one wins the award for best dark beer in South America.

The final beer that made the cut is made by the Austral Brewing Company.  This brewery is a bit bigger, but the beers were surprisingly good.  They have a wide variety of brews from lights to darks, and none of them disappointed.  This brew is a little more expensive than the rest, but rest assured, the flavor is worth it.

On to the food…

During a long bus ride in Chile, we talked with a guy from Santiago and got an insider’s scoop on this long and skinny country.  When we asked what a good traditional Chilean dish was, he suggested the Completo.  What is this amazing dish you ask?  It is a hotdog covered in avocado and served with ketchup and mustard.

Hotdogs are literally EVERYWHERE in Chile, so much so, that they really should be considered the national dish.  Our friend from Santiago did recommend that we spend at least $2 on one or the quality would be questionable. Kristen didn’t want to deprive Joe of all the delicious hotdog goodness, so she let him do all the sampling.

Not believing that this dish is the best that Chile has to offer, we pressed him a little harder and he also recommended the Pastel de Choclo.  This dish might not be any healthier than the completo, but it is much more local and tasty.  It tastes like cornbread pot pie and it is stuffed full of choclo (Spanish for corn), chicken, meats, and other tasty surprises.

Pastel de choclo and a half eaten salad.

This meal should be ordered with caution because it will stick with you, and to your ribs, for a few days.  It is unique and satisfying, but quite the gut bomb.

Chile seems to have a never-ending coastline, so the seafood was bound to be plentiful and amazing.  We enjoyed many amazing dishes but here are just a few that we dream about when confronted with a completo.

These shrimp empanadas were enjoyed at the beach in Con Con, near Vina del Mar.  It took about 30 minutes for the lady to make them, but they were amazing.  We almost missed this photo op, as neither of us wanted to put ours down to grab the camera. 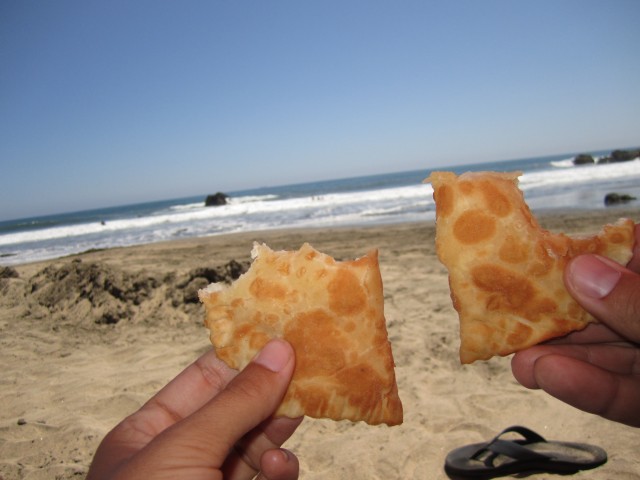 This next magical dish had everything the sea has to offer. (Check out how big that mussel is on the side!)  This dish still makes Joe salivate and it rates right up there with the cuaranto he had in Castro.

Seafood Paella- just one of many that we consumed during our time in Chile.

An abundance of fresh fish also means one thing: SUSHI! The sushi stepped up to the plate while in Chile, these amazing rolls only lasted about 3 minutes.  We had this sushi in Santiago where it seems there is a sushi shop on every other corner.

If Chile is famous for seafood and wine, then it should be equally famous for its produce.  So much of our produce in the US is shipped from Chile and it was funny seeing the same stickers we normally see at our home grocery.  We did a good job eating our fruits and veggies, and even drank a few of them.

Chile varied greatly on food.  When it came from the ocean or from the ground it was usually amazing, but other dishes were a bit lackluster.  Just look at the completo; it does not conjure up images of fine cuisine. Especially in Southern Chile, food was a bland affair as fresh produce was severely limited, and everything seemed to be pizza, empanadas, or hotdogs.

Now as hinted to earlier, we have enjoyed some savory wine while in Chile.  Either by ourselves or with new friends, decent wine has been a nice new addition to our drinking options.  The prices are such that you can even get a decent bottle without breaking the bank.

Being on a budget, Joe has his favorite bottom shelf brand. Even after getting some razzing, he still buys it and we drink it with gusto. 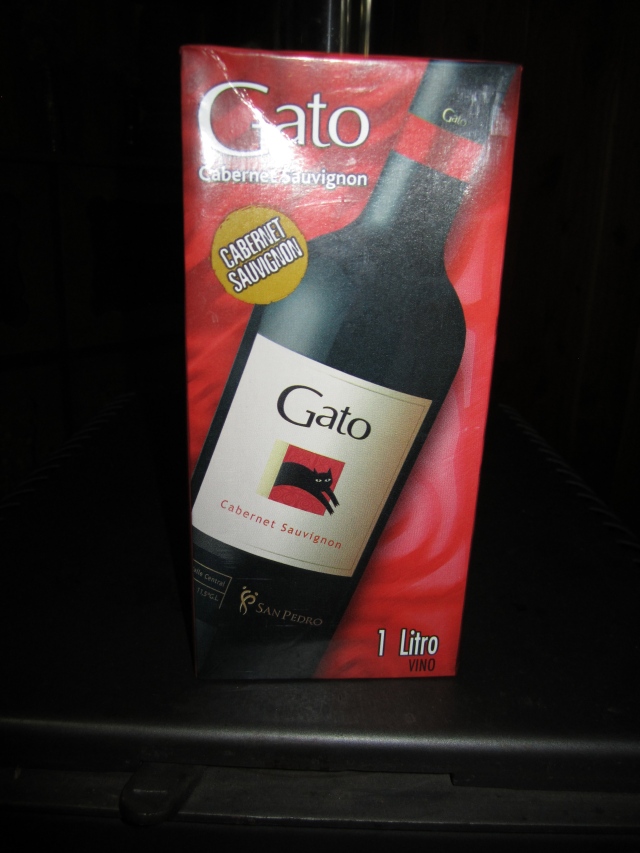 Fancy, huh? And yes, that is a one liter box.

This little box is a real crowd pleaser.  Many people have scoffed at the box, but once they tasted it, they were converts. It also may have something to do with the price ($3 for a liter of Gato). Joe’s PSA: Don’t be afraid of the boxed wines, not only are they better for the environment, but they are also a lot easier to open.

With the coast never being more that 200 miles away we almost always found good seafood to satisfy our cravings.  Eating in Chile has provided more variety than in Bolivia (at quite an increased cost), but we found ourselves missing those cheap and fresh lunches.  Yes, the typical Bolivian menu of soup, meat, and rice did get tiresome, but there were many times in Chile were we would have gladly paid $10 to have one of those homemade soups with all those fresh veggies.

Our quick preview of Argentinian food has us worried.

What we have seen so far: delicious but pricey meats and terrible pizza. Oh, and hotdogs are called panchos. Uh oh.