Arriving in Cusco after a long night bus, Teresa and Kristen couldn’t help but make numerous references to the Disney movie, “The Emperor’s New Groove.” To Joe’s delight, most of those references consisted of singing (many times off-key) whenever someone simply said the word “Cusco”. Luckily for Joe (and anyone else who happened to pass by), there weren’t too many similarities between Cusco and a cartoon where David Spade gets turned in to a llama, so the sing-a-long quickly died out.

A quiet street in Cusco

We had a few days in Cusco to get acclimated to the altitude (10,900 feet above sea level) before taking off on our Inca Trail adventure. With Machu Picchu being one of the “must see” places in the world, it should be no surprise that Cusco is touristy, and it did not disappoint in this aspect. We were constantly approached about anything and everything: massages, tours, restaurants, pictures, buying handicrafts, etc. During one particularly memorable time, we must have been approached at least 10 times in under 3 minutes. While it can be frustrating to feel like a walking ATM, we try to remember that these people are just trying to make a living, and about 95% of the time, most vendors would accept our “No, gracias,” and leave it alone. Despite the numerous tourists, Cusco is actually a pleasant town to spend some time in. The Plaza del Armas (the main square) was large and a pleasant space to wander through.

Joe and Kristen both agreed that the town looked very similar to Ayacucho (minus the herds of tourists). Our hotel was a bit out of the center, so it gave us a nice glimpse of local life.

We took it easy during our time there in order to rest up before the hike and because Teresa wasn’t feeling too well. Before you ask, it wasn’t “stomach issues” like everyone there assumed. She thinks that she caught some sort of bug before she even got to Peru. She was a trooper and we were still able to see and do quite a bit. One day we took a day tour to a few of the sights located outside of Cusco. Our first stop was at a local artisan shop, which was actually an interesting place and it had a some decent deals- Teresa couldn’t resist picking up another llama sweater. They went through a demonstration on their traditional knitting and weaving process.

The coolest part was seeing how the girls use the drop spindle to spool the wool.

Showing us how to use a drop spindle

We would see women using this all over while doing a variety of activities- from just walking to herding sheep.

Traditionally, a woman has to be able to create a poncho for her future husband before she can get married. Thank goodness we don’t have that tradition back at home, or I don’t think anyone would be married. Next, we went to check out the beautiful salt ponds in Maras.

Salt has been extracted from this area since Pre-Incan times. According to our guide, local families each have a certain number of ponds to tend to.

Extracting the salt from the pond

The whole place was spectacular, and like nothing we’d ever seen before. Our final destination was Moray, an impressive Incan ruin.

The theory is that the Incans used this terracing as a kind of agricultural laboratory. The terracing creates microclimates within each terrace. It was fun to walk around them and take some fun pictures.

Teresa and Joe jumping for joy

Supposedly the Incans always worked with nature, so these terraces fit neatly in this valley and created some great lines.

Crazy curves- Check out the stairs!

The stairs were a bit scary to walk on

Fun times with the Incans

After we returned from hiking the Inca Trail and Machu Picchu (don’t worry, that post is coming up soon!), we spent another night in Cusco. While it was nice to be able to take a hot shower and sleep in a real bed, we were really excited that we’d be able to attend the soccer game the following day.

While on our hike, our guide, Edwin, was ecstatic to learn that his local team won their game and was headed to the finals. If they won the finals, they would move up to the next league. When we expressed interest, he instantly invited us to join him for the game, and we were all happy to accept! We met up with Edwin and fellow trekker, Michael, hours before the game was to begin. We walked to the stadium area and instantly knew just by the sheer number of people that we were in for a treat… this was a much bigger deal than the game we saw in Huancayo.

Getting tickets was an interesting feat. The line was so long for tickets that they sold out of the “home team” section before we got there. 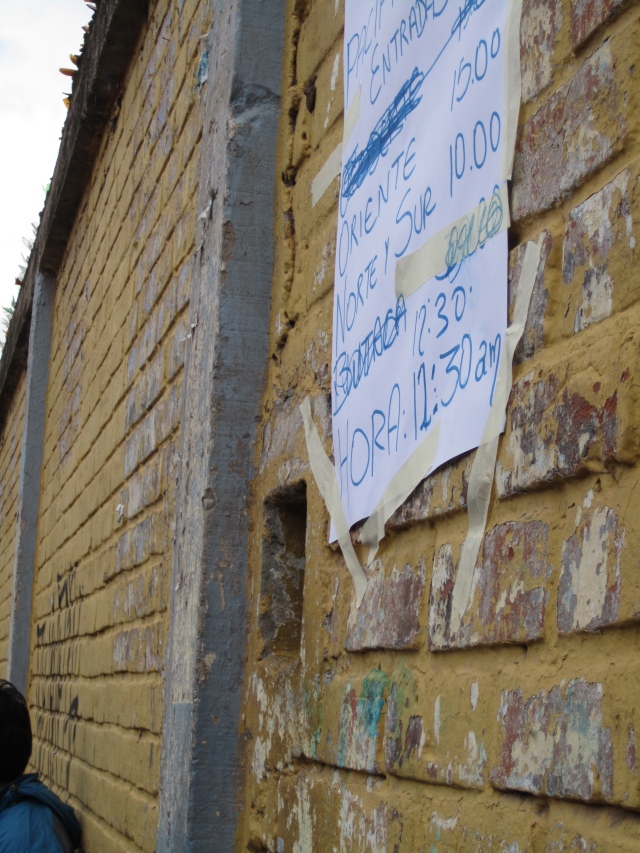 The ticket "window" is that hole in the wall

Luckily there were plenty of scalpers ready to help us out.  Our first deal fell through when the scalper’s mom came in and stopped the deal because she thought the 2 sole commission per ticket was not enough. Oddly enough, another scalper came in and offered the tickets we wanted for face value. Kristen immediately smelled a rat and asked the lady a few times why she would want to sell them at that price. She said she just wanted to get rid of them, and Edwin reassured her that they don’t make fake tickets here. “That’s only a problem in Lima,” he said. So we ended up scoring great seats for 15 soles (about $6).

Even though it was over 2 hours before game time, the line was already long to get in and so we decided to head in to the stadium. Edwin said that they sometimes ran out of seats (but I thought fake tickets weren’t a problem?), so we didn’t want to miss out.

The line seemed to wrap around the stadium!

The line was crazy and, us being the only gringos, we were quite the sight. Someone even shook Joe’s hand!

While in line, some sort of cultural parade went by. I was amazed that they made it through the madness!

It wouldn't be Peru without some sort of parade!

Our section quickly filled in and we passed the hours before the game with people watching and eating. The game finally began, and so did the rain. This made the game play a little bit sloppy, at best. The fans, however, were very much in to it. Let’s just say we got a great refresher on the most colorful Spanish words.

Cusco vs. Lima (Blue vs. Pink)

Luckily, the second half brought the sun, a marked improvement in playing, and a win for Cusco (3 to 1). All of us enjoyed watching the crazy antics both on the field and in the stands. 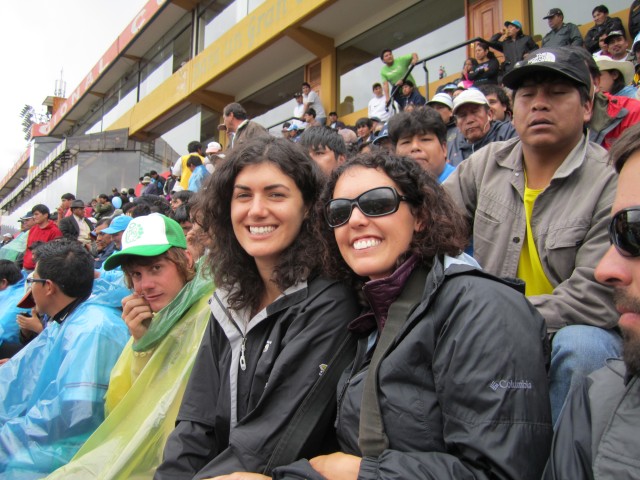 Teresa and Kristen enjoying the game, while Michael cleans his teeth.

Getting out of the stadium proved to be the next challenge. 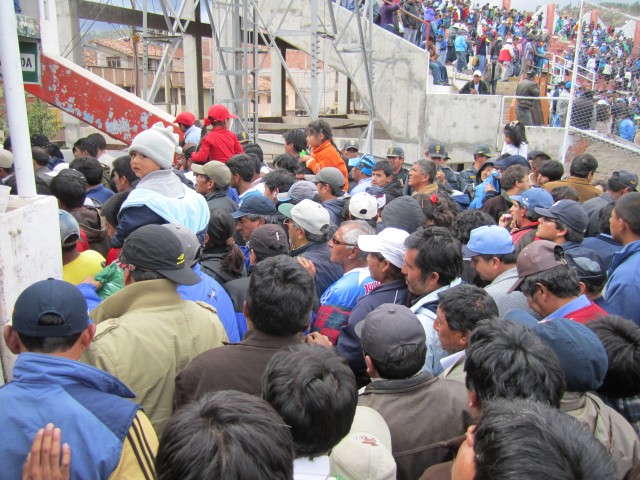 Surprisingly, this madness moved faster than you would think.

Luckily, we made it out unsquished (a benefit to being “muy alto”). Unfortunately, we had to bid a final farewell to our new friends, Edwin and Michael, before catching our bus out of town.

Cusco, thanks for the memories!

2 Responses to Cusco (What’s his name?!)