(Better watch out for that man-eating jackrabbit and that killer cacti!)

We continued on our adventures in this land lost in time, with a horse back ride through the beautiful coffee covered hills. The goal was to make it to “La Cueva del Esplendor,” which is a large cave with a waterfall rolling through it. And no, for your information, this is not the most dangerous thing we’ve done in Colombia.

Roberto, our hostel owner, set us up with a good friend of his, Bernardo, to take us on this six-hour ride.  To call it horse back riding is a bit of a stretch, because it was actually one horse and two mules, but to city folks like us, it was all the same. At the time, riding a horse seemed like an easy way to scale the massive mountains, muddy ascents, and narrow trails. However, after we finished, our butts and knees were not too happy with us.

We met Bernardo nice and early (8 am), saddled up, and made our exit out of town and in to the hills. 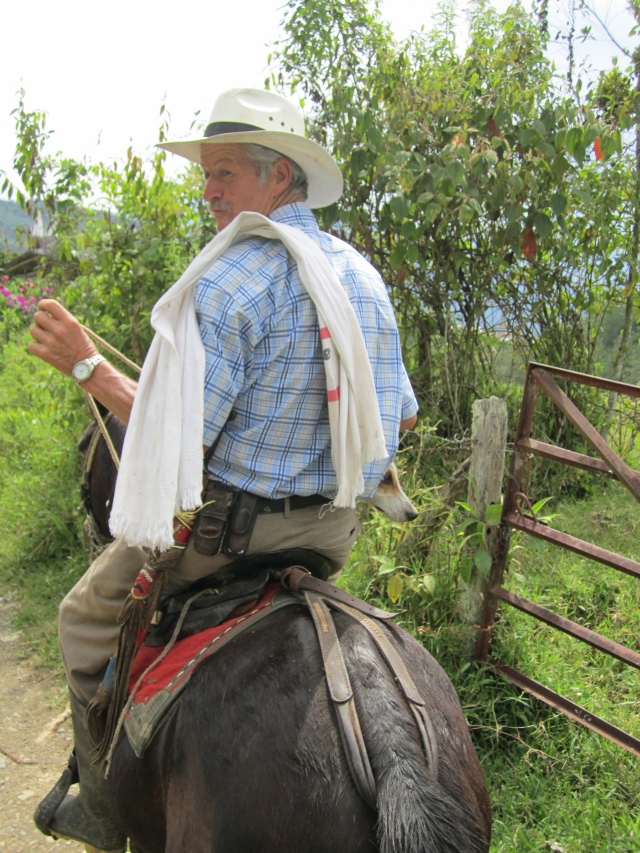 Bernardo, our trusty leader, with his machete, pocket knife, poncho, and cell phone

As we click-clacked through town, we tried to look like we do this everyday, but judging by the looks got, I’m pretty sure we failed. We headed out of the town and started to climb the hills, through farms, past grazing cows, and with amazing views at every turn.

At some point early on, we added a new member to our posse, a friendly little dog, and the four of us blazed the trail.

Eventually, the pueblo of Jardin disappeared into the distance, and we climbed higher and higher into the pastures.  As we steadily gained altitude and the trail became more difficult, we were thanking our lucky stars that we had a guide and were on horses/mules.  The scenery was breathtaking and we were continually amazed by the range of vivid greens you can see on one hillside.

Nice little farm with a view

After two and a half hours of forging streams, meandering through pastures, and climbing hills, we arrived at the point where our own two feet had to do the rest of the work.  Our horse and mules took a nice break, while we headed into the dense jungle and attempted to make our way down the very steep and muddy trail to the cave.  Bernardo, our 60+ year-old guide, made easy work of this trail while we slipped, tripped, and literally fell our way down.

Uhh, so where was that trail?

The furious sound of water falling was our first signal that we had arrived. Even before seeing it, we knew it was going to be something special.  We turned the corner, and we were greeted by something truly stunning.

Cave entrance with waterfall in background 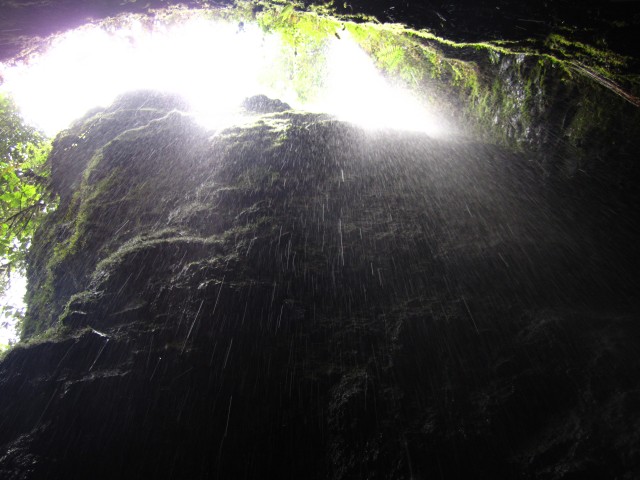 Water falling at the cave entrance

The waterfall was so powerful that it made it difficult to hear while inside, which was fine because words could not quite describe what we were seeing. We felt as if we had stumbled upon a magical place.

We were given the chance to take a dip, but the mountain spring water was a little too cool for our liking. And by cool, we mean FREEZING. Kristen was only able to go in up to her ankles before she headed back out.

Kristen testing out the water

Leaving the cave, we headed up a different, but not easier, path to get a look at the top of this monster.  The jungle was so dense, and the hill so steep, that we were happy to take a quick break and look down the throat of the waterfall.  We were told that some people rappel down this part of the waterfall, but unfortunately that was not happening on this day. 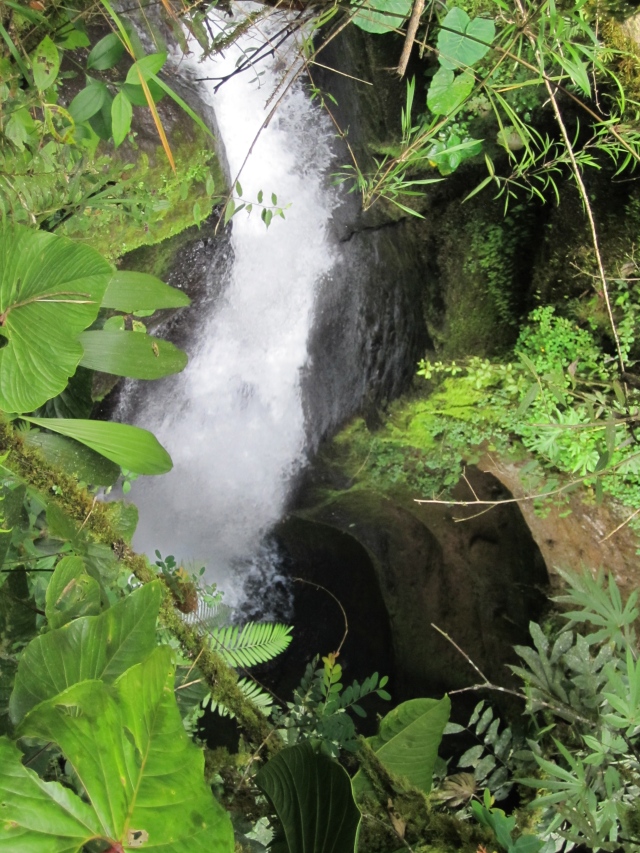 View of waterfall from the top

After some more arduous climbing, we returned to the top of the cliff where we had started. We were then treated to an amazing lunch of various meats, veggies, and fruits wrapped in a banana leaf.  The three of us sat around on the hill, taking in the scenery and attempting a Spanish conversation.

After lunch, we again mounted up and headed back to town. The views continued to be great and the ride was thrilling at times. During some of the steep downhills, we had to hold on pretty tightly or risk falling off in to the mud. Luckily, we all made it back to town in one piece and relatively mud free.

Our little friendly dog trotted along with us for the entire trip and followed us back into town.  It seems that even the dogs in Colombia want to make sure the Gringos are having a good time!

A cow pondering the great view

The only problem with a six-hour horseback ride is how you feel the next day. Muscles we didn’t even know we had were hurting in ways we didn’t know were possible.  To add insult to injury, the day after riding, we had a “pleasant” eight-hour bus ride to get to Salento.

So, what you all have been waiting for: the most dangerous thing we have done in Colombia.  You might think it would have been rappelling down a 80 meter waterfall, diving under rocks in a cave, braving the buses flying down the road, or walking in wild Colombian jungles. You would be wrong.

This is a danger we face on a nearly daily basis, while trying to do the most mundane activity. 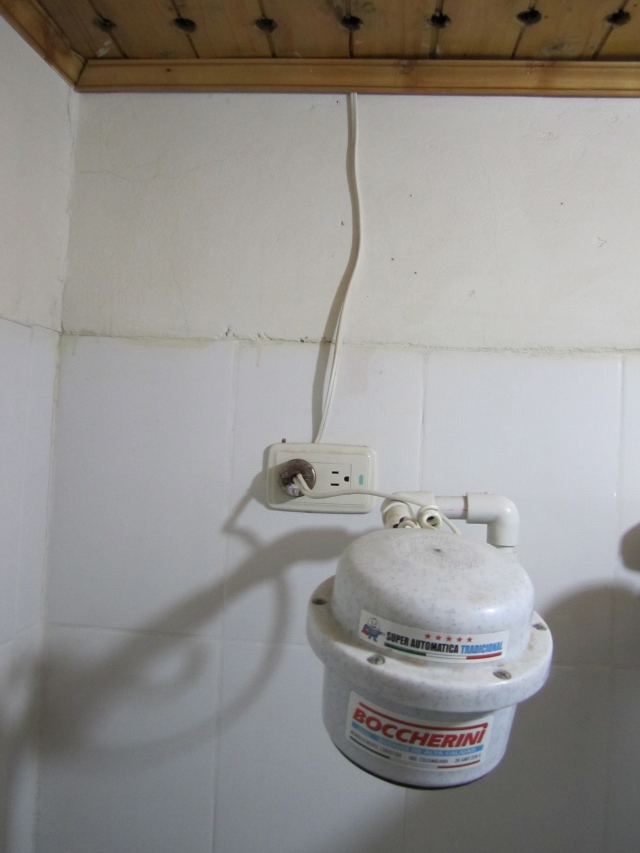 This little monster is known as a “suicide shower,” and for good reason. Nothing like adding water and electricity together for a hair-raising experience in the shower.  This one was particularly exciting because not only did it have exposed wires, it also had a plug right next to the shower head.  You had to be somewhat careful while washing your hair not to extend your hands too high.

Calling these hot water showers is a bit of an overstatement, because most of the time they are just luke-warm. The trick is to not have too much water flowing, because the more water, the colder it is. This has often led to showering in little more than a trickle. But, trust us, a warm trickle is better than a freezing jet stream.

Sorry if you were expecting our “dangerous activity” to be a little more daring like mountain biking without brakes or wrestling crocodiles.  Despite its reputation, Colombia has been surprising safe. It is a bit sad to say that showering has been one of the more dangerous activities we have partaken in.

On to Salento to enjoy some more time on a farm, including milking cows!

P.S. – Check out the “Locator” tab at the top to see where we are and where we have been!

Taking off for a year to see what the world has to offer.
View all posts by shoefry →
This entry was posted in Colombia and tagged cueva del esplendor, horse riding, jardin, mule, suicide shower. Bookmark the permalink.

4 Responses to Yippee ki-yay ya!